The 2015 State of Scrum Report 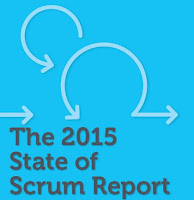 This post is a summary of the salient points from the Scrum Alliance State of Scrum Survey 2015.


In February 2015, Scrum Alliance® surveyed almost 5,000 people about their use of Scrum. The survey respondents make up a diverse group, representing 108 countries and more than 14 industries. They reflect a range of functional areas, including IT software development, product development, operations, human resources, executives, and sales and marketing. Most have a technology slant, with 44% working in software development and 33% in IT. And they’re an Agile-savvy group, involved in an average of 4 Agile projects in the last 12 months.

I. WHO IS PRACTICING SCRUM?
• Scrum practices are currently in place among 82% of respondents, and another 11% are piloting Scrum.
• IT and software development professionals continue to be the primary users of Scrum, followed by product development and operations professionals.

II. WHY ARE THEY PRACTICING SCRUM?

•Nearly half the respondents (49%) cite fulfilling customer needs as the highest business priority for Scrum projects.
• Meanwhile, the second-highest priority is all about the business — meeting budget, time, and scope constraints.

III. HOW ARE THEY PRACTICING SCRUM?

• The average team size is 7 people.
• Most Scrum teams (60%) follow 2-week sprints.
• 81% hold a team Scrum each day.
• 83% conduct sprint planning prior to each sprint.
• 90% use at least some Scrum artifacts
• 81% hold retrospective meetings.
• 42% of respondents report using Scrum exclusively.
• Of those using a combination of practices, 63% practice Scrum alongside Waterfall.
• 43% combine Scrum with Kanban.
• 21% combine Scrum with Lean.

IV. IS SCRUM WORKING?
• The overall success rate of projects delivered using Scrum is 62%.
• Teams of the recommended size for Scrum — 4 to 9 members — report the most frequent success

VII. THE FUTURE OF SCRUM
• 95% of respondents say they plan to continue to use Scrum moving forward. 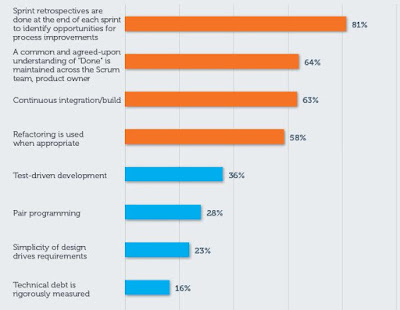 You can download the detailed report from the Link of State of Scrum Report - 2015.
Posted by anishcheriyan at July 25, 2015